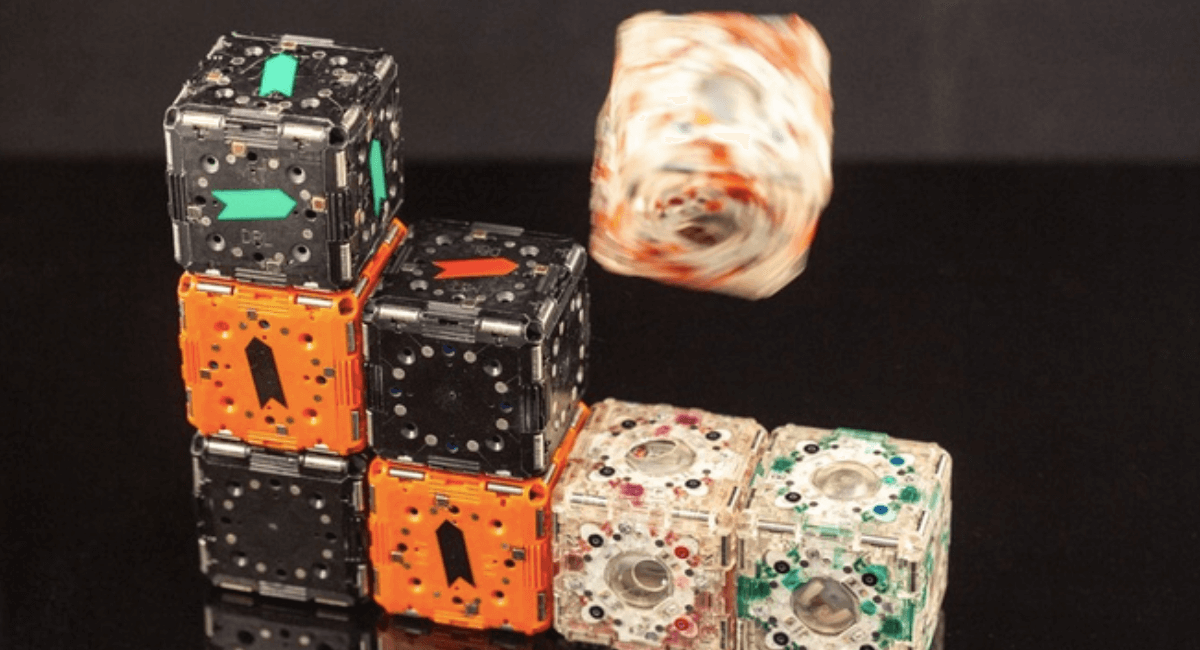 When new robots are created, they are often individual and rarely form an “army”.

Here’s a robot that can be assembled automatically.

It is called M-Blocks and is manufactured by a team from the Massachusetts Institute of Technology ‘s Computer Science and Artificial Intelligence Laboratory (CSAIL).

M-Blocks was designed six years ago, and at the time it was a simple sample:

The side length of 1 .5 inch mechanical block, with the built-in mechanism, can rotate and move on its own:

Intelligently assemble into a variety of shapes:

With the latest upgrade, these mechanical blocks have been able to identify “communication” with each other.

They can unite for simple interaction.

Find each other and cluster together:

This means that the robot is one step closer to the Bee colony like of collaboration.

So how do they accomplish these actions, assemble and collaborate?

Each modular M-Blocks has a flywheel inside that can run at a high speed of 20,000 revolutions per minute, which generates angular momentum each time it rotates, keeping the rotation jumping and non-stop.

Every face of the exterior is fitted with a permanent magnet to bind the blocks closely together.

Each block moves in four directions on either side, so there are 24 different motion scenarios.

Compared to other shapes of the robot, it is a square structure, which allows them to minimize the damage caused by bumps.

But the real challenge is how they “communicate” with each other.

If the system uses radio signals, the device will interfere with each other with more than one signal, and if infrared light or radio waves are used, many robots send signals to each other at the same time, creating conflicting and chaotic signal channels that prevent the robot from moving.

Finally, the researchers devised a micro-communication system similar to a bar code that allows the robot to sense the “identity” of other modules, allowing the robot to identify each other and accomplish simple tasks in combination by placing such a small barcode on each surface.

The unique thing about our approach is that it’s inexpensive, robust, and potentially easier to scale to a million modules.

M-Blocks can move in a general way. Other robotic systems have much more complicated movement mechanisms that require many steps, but our system is more scalable.

The project has been part of the National Science Foundation and Amazon Robotics, and the paper on M-blocks was presented on the IEEE International Intelligent Robotics Conference in Macau in November this year.

And as for how it gets into our lives, the team says they will be able to fulfill the needs of many specific situations.

For example, when a fire breaks out, throw large numbers of M-Blocks next to critical buildings, they can quickly pile up makeshift stairs to roofs, high-rises, basements, and save people from raging fires.

Besides disaster relief, the researchers say they can also be used in games, manufacturing, health care and other fields.